My experience doing fieldwork for the first time

Conducting real-life fieldwork, as opposed to between the shelves of the SOAS library required motivation, and both attentive listening and observational skills.

At one point or another, most people will go through the nervousness of trying something for the first time. While there are many ways to prepare for new experiences, nothing encapsulates them as accurately as experiencing it first hand. There exists a major difference between interacting with disciplines through readings versus through real-life practice, whether it be with music, law or in this case: social anthropology. For the past two and a half years, being a student of social anthropology meant that I read countless ethnographies before embarking on my own fieldwork. Despite this background knowledge, I still found myself in a completely new situation when engaging in participant observation for a research paper.

My project for the module New Religious Movements in Africa, Asia and the Middle East required fieldwork on any new religious movement of my choice which had a site in London. A strong personal interest in Black history and my American Upbringing led me to choose the Nation of Islam, based in Brixton. (The Nation of Islam was founded in Detroit, Michigan USA in 1930 with the aim of improving the mental and socioeconomic conditions of African-Americans, suffering from the aftereffects of slavery and segregation)

The fieldwork task seemed simple: participate in events, compose a research question, conduct interviews and write a paper. However there are lots of points to consider when embarking on a research journey with people whom you have never met, and places you have never gone. How will I be received? Will I feel uncomfortable? Will I make others feel uncomfortable? Will I stand out? Moreover, conducting ethnographic fieldwork oftentimes means placing yourself in a situation where you are noticeably new, and there solely to study others; this creates certain unavoidable power dynamics. How the group being studied ends up being represented is almost entirely in the hands of the ethnographer. In the field of Anthropology, a discipline which emerged in the colonial era as a way to study and understand the ‘other’, this power dynamic was often seen with the description of foreign peoples as ‘savage’ or ‘uncivilized’. This depiction of the ‘other’ as ‘less than’ provided the framework upon which colonial projects and civilizing missions were founded. While the discipline has evolved and made considerable efforts to distance itself from its problematic past, these power dynamics nevertheless remain relevant. Being in charge of how I represented the Nation of Islam in my research paper was a great responsibility. Oftentimes New Religious movements are surrounded by skepticism from the wider community. On top of that, the limited time I had to conduct my research meant that I would have a surface level understanding of the movement.

I was able to overcome these new challenges by engaging with the people of the field through interviews and casual interactions. What I learnt from these conversations allowed me to direct my research paper within the scope of my fieldwork: The importance of community service to the Nation of Islam. This was one that was well received by the people I was interacting with. While I did feel like I stood out at certain times, I was made to feel very welcome throughout the process. I learnt that people are often very receptive to anthropology students. They took an interest in my project and were curious to know what led me to choose their movement for investigation. Mostly, I learnt that conducting real-life fieldwork, as opposed to between the shelves of the SOAS library required motivation, and both attentive listening and observational skills.

Much like any new experience, I’m glad I took on the challenge. If your degree allows it, I would recommend conducting ethnographic research at least once during your time at university. It allows you to learn about yourself and a topic of your choice. And dare I say; the sense of accomplishment felt when pressing ‘upload’ is much more powerful than when its a regular essay.
P

By Fakhriya M. Suleiman, MA Global Media and Communications My first encounter with Malcolm X was during secondary school. It...

Three SOAS Freshers Reflect on a Strange Start to the Year

By Ella Dorn, BA Chinese and Linguistics When Valerie Amos announced in mid-March that all SOAS classes would move online as a...

Decolonising Knowledge, Decolonising Education: In conversation with Amina Yaqin, Director of the SOAS Festival of Ideas

By Maliha Shoaib, BA English and World Philosophies  The SOAS Festival of Ideas featured a series of panels and events...

By Matthew John Turnbull, MA Japanese Studies Renku has a long history in Japan, dating all the way back to the Heian Period... 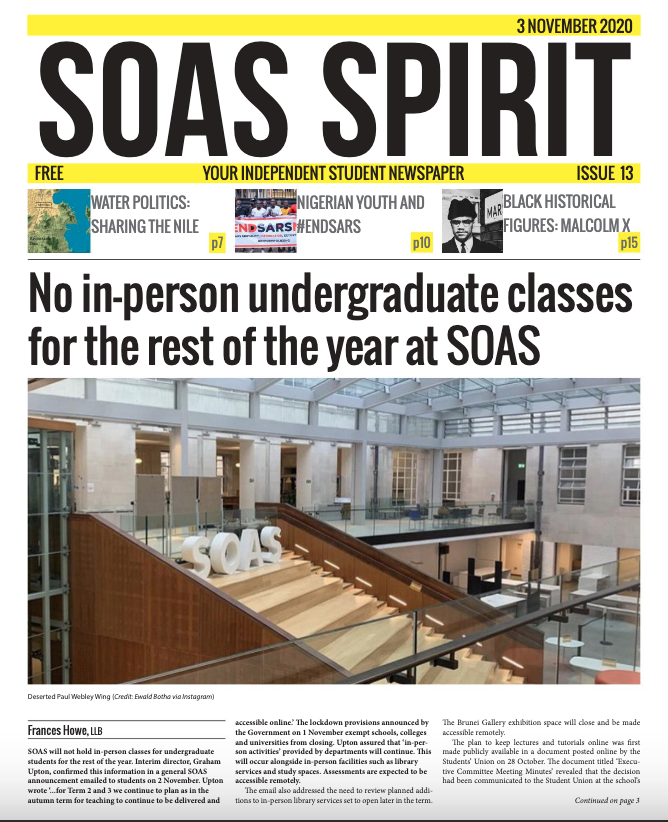